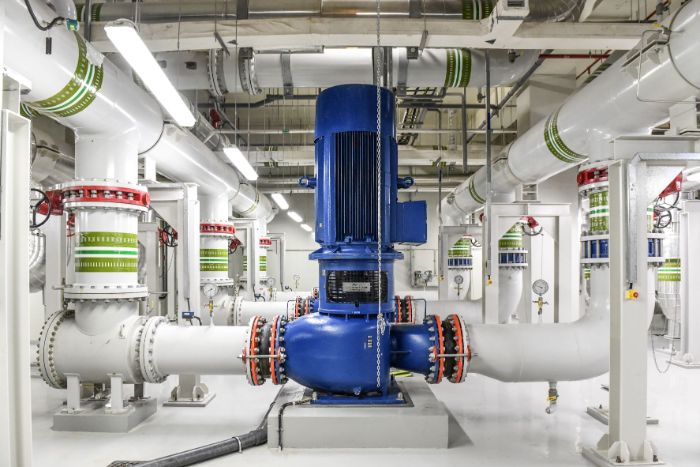 Government regulation and adoption of stringent ratings systems are important if the Middle East is to reduce energy usage from buildings, which is some of the highest in the world

While developing clean renewable energy resources grabs much of the energy transition media coverage, increasing the energy efficiency of infrastructure is the easiest place to start.

During a panel discussion entitled “Energy efficiency focus”, experts addressed some of the approaches and technologies which are being adopted by government entities and the private sector to reduce CO2 emissions and opex costs.

Beyond energy efficiency, Francisco Ramalheira, SVP in Business Development and Marketing at Enova, said it was important to discuss the effectiveness of energy use. “These topics go hand in hand when we talk about buildings and utilities,” he said. “We are not skimming the surface. If we look at what’s been done by the UAE and Saudi Arabia, this has generated momentum on the market, initially with the public sector, but it’s triggered the quasi-government and private sector to follow suit.”

Many companies, such as Enova, are actively looking for opportunities on the market, not just from the public sector, but from the private sector too. Ramalheira said he sees a momentum, even with large developers with large portfolios, like Tecom, making massive investment when it comes to retrofits, while also looking at the supply side, on solutions that can mitigate some of the dependency in terms of their utility breakdown. But more can be done.

“There could be two or three things that could come into place,” he said. “One is with legislation for new buildings, we’re still lagging in things that could be applicable for existing buildings to address their performance, and the second is access to financing with sensible interest rates.”
He said promoting and “sensibilising” the general public about what an energy performance contract means is also vital. “We are all responsible for this,” he added. “All stakeholders involved in this process should play a role.”

Ahmed Elkiki, Director of Technical Services at RAK Hospitality Holding, highlighted that developers are not all the same. For him, the government has a role to play in introducing a rating system, which would rate a building based on its energy efficiency, therefore allowing developers to add a premium to their selling price, and filtering out less efficient buildings in time.

“We’ve seen now the regulation of household devices with star ratings of energy,” he said. “Customers would rather have an energy efficient device that will cost them less over time. It will be a language between the investor and the buyer that will save a lot of money – you’re going to get a return on your premium, but we’re a bit late in introducing this.”

Luay Khdeir, Regional Water Market Director at Atkins Global, highlighted the efficiency question when focusing on water. In the last 10 years, when looking at the structure of a desalination tariff, the largest portion at that time was the EPC in terms of building the plant. However, in the last five years or so, there has been a new wave of desalination, with the energy component becoming higher than the EPC as part of the pie comprising the tariff.

“And each project is as good as the previous one when it comes to efficiency and tariff,” he explained. “The tariff went from a dollar per meter cube to 0.4 and 0.27. So all developers started looking and saying they need to make an efficient design, EPC, and operation to drive all the way having the right tariff.”

He also mentioned efficient competitive finance and how to attract that finance to the right projects. Khdeir believes the efficiency will continue and there will be more competitiveness and dynamics across all the supply chain, from planning all the way to operational maintenance.

He said the efficiency question can be addressed through three main D’s, starting with diversity, under which he outlined three main streams in utilities. They include age, gender and nationalisation, which focuses on the contribution of GCC nationals to this change.

“Utilities attract around 80 percent of what we call today Generation Z, which is up to 24 years old, so we will have a serious problem where we don’t have enough interest from younger generations to come in and drive change,” he said. “Another challenge is gender: the demographics in a utility system you might find are 20 to 25 percent females versus males, and it’s worse on the operational side, not even reaching double digits.”

In the context of nationalisation, he said 25 percent of GCC nationals are young, between the ages of 15 to 29, yet last year, unemployment rates were close to 12 to 13 percent, and three times higher for females due to a skill mismatch between education, skills and job. “The private sector is not stepping up to attract these nationals so you need to bring these diversity dimensions together,” Khdeir added.

The second D he mentioned is decarbonisation, which he believes is not that straightforward and has to be done in a systematic way, where the vision of the organisation, city or country needs to be understood, before engaging with various stakeholders and coming up with a roadmap. Such a roadmap has to include a phased approach with priorities and targets. “It would be difficult to reach complete neutrality without having offsetting mechanisms,” he noted.

The third D that Khdeir highlighted is digitalisation, whereby the top objectives focus on the enhancement of the citizen experience, rendering it simple and rich, so that the engagement with various end-users can become more beneficial to the solutions.

“We also need to be aware of cyber security and its consequences,” he concluded. “One solution in water is leakage, where it amounts to close to 40 percent in some countries. Using satellite images can be a solution to identify pockets of major leaks within the country and, if you identify these at an early stage and you address them, you will save a lot of money.”