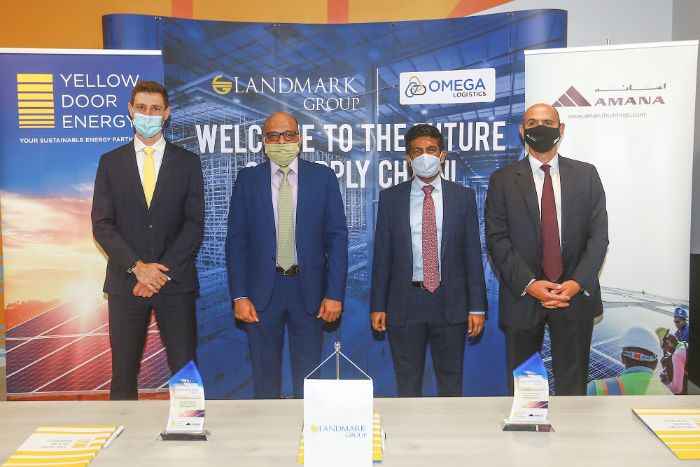 The project will involve installing and connecting more than 6,000 solar panels to the rooftop of Landmark’s fully automated OMEGA warehouse, which will be able to generate 4,200 megawatt hours (Mwh) of clean energy annually

Yellow Door Energy and Amana Investments have joined forces to sign a deal with retail group Landmark to develop a 2.6MW photovoltaic (PV) solar rooftop system at one of Landmark’s warehouses in Jebel Ali Freezone, Dubai.

The project will involve installing and connecting more than 6,000 solar panels to the rooftop of Landmark’s fully automated OMEGA warehouse, which will be able to generate 4,200 megawatt hours (Mwh) of clean energy annually.

The power generated from the solar rooftop will be the equivalent of reducing carbon emissions by 1,700 tonnes a year or removing 380 cars from the road.

Yellow Door Energy has a portfolio of more than 100MW of solar projects across the Middle East.

Energy & Utilities reported in February that the solar developer had started construction on a 2MW solar project for Future Pipe Industries (FPI) in Dubai’s Industrial City.

The rooftop solar project will cover the roofs of four warehouses, covering a total area of 18,000 square metres. The plant is due to commission 3,100MWhrs of clean energy in its first year of operation, commencing in the summer of 2020, which is equivalent to reducing 1,300 tonnes of carbon emissions a year.